Skip to primary content
This year’s Advent series will focus on those who should have experienced far more Christmases than they actually did. That’s right! It’s Famous Murder Victims’ Christmas here at IB Crabby’s.
Gruesome you say? Dark and creepy? Well, sure, if you want to look at it that way. But after watching Seymour stuff all sorts of things dead for his taxidermy classes and practice his post mortem make up techniques on me, I got to thinking – after their lives are cut short, against their will and usually against the will of their families, who besides immediate family remembers these folks in a cheerful way?
Thus my choice this year. Let’s imagine what these folks would be doing if they were here to celebrate Christmas today, as a way to send them cheer to the other side.
Today we start with Elizabeth Short. The famous Black Dahlia. She would be 86 today. Very likely a great grandmother. I picture her in a lovely, sunny room in the Motion Picture Home. One wall is covered with still photos of herself alongside various actors from the old films and sitcoms she worked on – Elizabeth Taylor, Van Johnson, Donna Reed, Gary Cooper and, oddly,  Walt Disney, though he doesn’t look at all happy about his picture being taken.
Another wall features the pictures of her three children from two husbands and a fleeting affair, along with her grands and great grands. The children are all happy and smiling, even though some of the parents look careworn and life battered. Their lives as children of a struggling actress were not completely happy, though the fortuitous coverage of SAG medical insurance provided some great therapy and psychotropic drugs.
Betty, as she is called by her friends, rocks peacefully in her room at the Motion Picture Home. She has no memory whatsoever of a fateful night when she lost her keys and was unable to make her usual prowl of Hollywood Boulevard on the night of January 14, 1947.
One of her sons, Fred, grew up to become a semi-famous congressman who introduced legislation for providing federal prisoners orthotic shoe inserts.
Merry Christmas Betty!
P.S. I Hope you were able to get those teeth fixed! 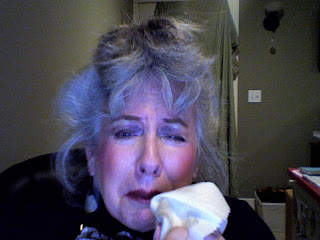