Skip to primary content
This weekend’s case is the grisly murder of Butch and Dawn DeFeo of their entire family – Mom, Dad and two brothers and a sister. The children were not supposed to be murdered, but Dawn didn’t want witnesses. Allegedly, Butch killed her in anger over killing their siblings.
The father was abusive to his children. I couldn’t find which kind, but does it really matter? For years, he tormented his kids. On November 13, 1974 Dawn, 18 years old, had had enough. She, her brother Butch, 23, and a friend all got high and drunk in the basement and decided to kill their parents. After the parents were shot with a Colt Python and a .35-Marlin rifle, the friend bolted. Butch ran after to bring him back to help clean up. While Butch was out of the house, Dawn decided there should be no witnesses, so allegedly, she picked up the rilfe, went and killed the two younger brothers and the younger sister. When Butch came back and saw what Dawn had done, he overpowered her and shot her with the rifle.
Butch was convicted of committing all these crimes alone. The friend was never prosecuted and Dawn was dead. Butch is sitting in prison right now, at 59, spending Christmas in a cell.
Their house became the Amity house, which was portrayed in a horror film. Though it seems it’s been proven that the story of the”hauntings” are bogus.
My series is to imagine what murder victims would be doing today if they had lived. This weekend’s entry is to underline this child abuse awareness that is going about Facebook, so this particular story won’t be pretty –
The elder DeFeos still live in the house, in their 80’s now. Mr. DeFeo isn’t as fast as he used to be, so he has to be sneaky when he goes after his grandchildren. Louise is suffering the onset of dementia. Butch and Dawn are both grown, and have had multiple marriages. Butch has anger management issues and has abused his own children, though he denies this. Dawn is a heroin addict and lives in and out of flop houses in New York City. The younger kids have issues as well. The kids of the kids have experienced one form or another of abuse, because that’s how child abuse rolls. Downhill. Chances are that the kids of the kids of the kids will be abused as well.
And why? How can this keep happening? Because, we, as a society, would rather glorify and be horrified over a trumped up, cockemamy fiction called “The Amityville Horror”, than be horrified over what really happened in that house that November 13, 1974 and the years leading up to that night. That’s why.
Now on this one, don’t shut up and don’t suck it up. Shout it from the mountaintops!!
I.B. Crabby 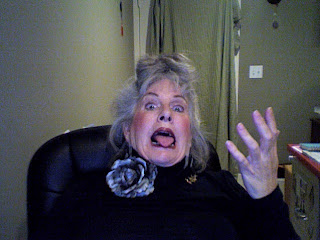