Skip to primary content
Dian Fossey would be 78 today had she survived her murder, arguably at the hands of angry gorilla poachers, and had she survived the advanced emphysema she contracted from smoking. Her skull was cleaved in two by her own panga (machete) that hung in her cabin. This has caused me to look about our room at the Dollar and put all the sharp objects behind the curtains.
You’ll probably remember Dian from Sigourney Weaver’s portrayal in the film “Gorillas in the Mist.”
Her life’s passion was preserving and protecting gorillas in their natural habitat. She stood down poachers and encroaching developers to do this. Gorillas were being killed by poachers for profit and Dian stepped in, raised her finger and said, nuh uh uh!! She did this at great personal risk. She left her own “big gorilla” fiance at home in the states to do this work. I find it an interesting counterpoint that she so passionately, with all consuming energy, worked to save gorillas, yet smoked her own lungs out.
Well, anyway, if she were alive today –
Dian is spending Christmas in her modest cabin in the Virunga Mountains of Rwanda, near her beloved gorillas. She cannot go into the field any more, but spends her days on her iMac, writing articles and pursuing/hounding politicians and philanthropists to help continue her life long obsession with saving the gorilla in it’s now remarkably smaller habitat. Though for fun and a diversion she writes a blog called “Misty’s Mustings” where she creates bawdy limericks. She continually pesters the Discovery Channel to make more documentaries as well as placing daily calls to Jeffrey Katzenberg of Dreamworks to produce an animated feature about a gorilla family, but without “any stinkin’ Tarzan or Jane”.
Having mellowed somewhat in her old age, she does not piss off quite as many people as she used to and actually has made several long time friends of a couple reformed poachers whom she used to stand down. They will visit her for a game of poker and cussing contests.
Dian’s biggest secret is the love child she had with Bob Campbell. Sadly the child died at the age of 3 from pneumonia, caught from one of Dian’s gorillas. The little girl’s name was Misty and Dian buried her on the Mountain near her favorite gorilla of all time, Digit.
She is still writing her memoirs. She says they will be finished when she is. At 1,932 pages it will be quite a challenge for the editor who has to parse it down.

Though, we would tell that editor: Now shut up and suck it up! 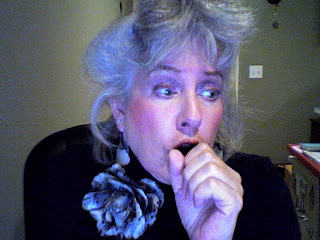