Skip to primary content
Today’s infamous story comes from the case of Emmett Till. Emmett would be about 70 years old this Christmas. But sadly his life was taken at the tender age of 14.
His murder prompted a book from his mother, who never saw her son’s case come to proper justice, Death of Innocence: The Story of the Hate Crime that Changed America. You see, young Emmett was a young black boy who was brutally beaten and murdered by Roy Bryant and his half brother, J.W. Milam because he kidded around with a store employee at Bryant’s store. The men confessed to the killing after the trial acquitted them. The FBI made politically correct noises about re-opening the case, but never did.
Well, if Emmett were alive today, at 70, I picture him living in a sweet house in Mississippi, surrounded by a large family with 6 children and 18 grands of varying ages. Two of his kids made it through college and, with the others, pitch in to help Emmett enjoy his golden years. Though Emmett does still work as a Wal-Mart greeter, because he loves people.  All Emmett’s kids, except for Eustace, are hardworking, fun-loving folks who are raising lovely families. Eustace has had a hard time since his accident with the combine, but his brothers keep him out of trouble by hiring him to look after their house repairs.
Emmett lived with his mama, Mamie, till she passed in 2003, always proud of her lively and outgoing boy. Though he never made it BIG, he brought a smile to everyone who knew him. Except for Carolyn Bryant who was a blind sided bigot. Back in 1955, Carolyn was on her way to her boss’s house to complain about Emmett. Emmett had given her a compliment about her new dress and she had taken it the wrong way. Who knows what might of happened had Carolyn not been killed in a head on with a semi on the way to Roy Bryant’s house.

Now you all go and enjoy each other’s company today without getting over-emo about kidding and compliments! 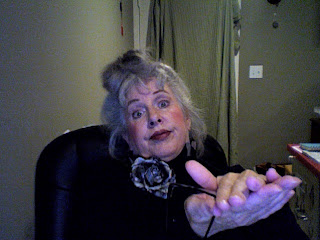